Home Lifestyle 5 Church Types That Can Take You To Hell And Why You...

The church is a haven and sanctuary for Christians. Every week, followers of Christ congregate in a special building to worship God and listen to counsels from their leaders aimed at guiding their steps in attaining the heavenly promise God has assured all Christians.

READ ALSO: 5 Female Ghanaian Celebrities Who Have Been Pressured to Get MARRIED

Unfortunately in Africa where Christianity and other form of religions were introduced through slavery, Christianity has assumed a whole dimension that puzzles the mind and drop jaws premised on some of the outrageous practices propagated in the house of the lord.

It’s against this backdrop that I’ve compiled a list of 5-types of church you have to avoid as a Christian if you really want it to heaven.

1. A church that centers its message on prosperity

Well don’t get it twisted, breaking free from the shackles of poverty is good but a church that uses prosperity as a propaganda should be entirely avoided. The funny thing is that majority of Christians are very poor, despite all the messages that are drummed in their hollow heads by their shrewd leaders all the time, along with how they will give the little they have to God to receive blessing which ultimately impoverish them further. When a message that should nourish their soul so they could walk in the path of righteousness are shoved into the dustbin and substituted with how to become rich all the time without working hard but by giving in the form of tithes, offertories and being a ‘good’ Christian, then it’s better to avoid such a church. Matthew 6:31-33 says: “Therefore do not be anxious, saying, ‘What shall we eat?’ or ‘What shall we drink?’ or ‘What shall we wear?’ For the Gentiles seek after all these things, and your heavenly Father knows that you need them all. But seek first the kingdom of God and his righteousness, and all these things will be added to you.”

2. A Church that’s obsessed with miracles

Africans are really pathetic- they flock to churches because they want to put an end to the avalanche of problems they are surrounded with. This is where their pastors capitalize on their desperation and engage in all forms of charades in the name of miracles. The average African thinks the only solution to his problem is through miracles and entrusting his destiny into the hands of their pastors, not even God. As Author Tim Keller eloquently put it, “We modern people think of miracles as the suspension of the natural order, but Jesus meant them to be the restoration of the natural order.” With passport being conjured from a pastor’s shoe and Lucifer appearing through humans during deliverance, churches in Africa have been fraught with mockery disguised as miracles.

3. A Church that relegates salvation

Let’s begin this segment with two key bible verses about salvation. Romans 1:16- For I am not ashamed of the gospel, for it is the power of God for salvation to everyone who believes, to the Jew first and also to the Greek (all Gentiles). Romans 1:18- For the wrath of God is revealed from Heaven against all ungodliness and unrighteousness of men, who by their unrighteousness suppress the truth.

It’s clear that salvation is simply acknowledging the supremacy of Jesus Christ and confessing that he came to save us. Unfortunately pastors don’t propagate this basic knowledge. They rather tell their members how to become rich by bringing the little monies they have to them while frightening them with archaic Bible verses that instill fears into so they can dance to the rhythm of their music.

4. A Church whose leader always insults other pastors

This is what some Kumasi-based pastors and almost all the Twi-speaking pastors do. They use a whole day on the pulpit insulting other churches and their pastors. Sadly, their credulous followers cheer them on which further deepen their credibility about contemporary Christianity. Perhaps they are not fully aware of these verses; Matthew 5:11-12 – Blessed are you when others revile you and persecute you and utter all kinds of evil against you falsely on my account. Rejoice and be glad, for your reward is great in heaven, for so they persecuted the prophets who were before you.

Read Also:  Di’Ja cautions follower who used her to mock actress Ramaha Sadau for being single

5. A Church where items are sold exorbitantly to members to induce miracles 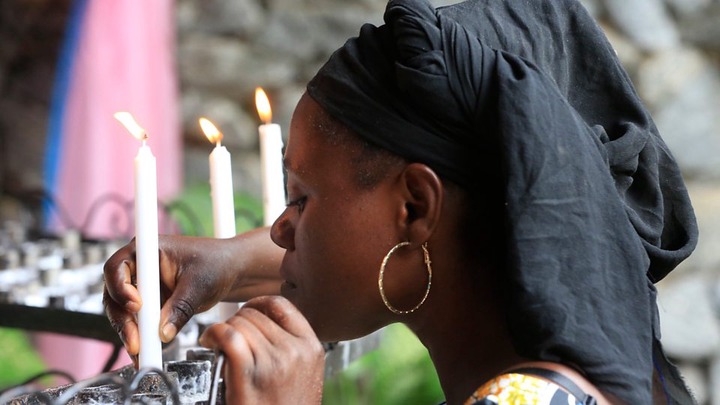 If you are already a member of a church whose leaders sell anointing oil, candles, calendars, stickers, handkerchief, bottle water, salt, stone, ring etc to members at an outrageous price to induce miracles, the time for you to run away from that church is now.